On January 27, 2020, NISA announced its spring schedule for the eight teams, with each team playing 14 games (a home-and-home series with each team), to run from February 28th to June 13th.

Then the pandemic hit.

Detroit City FC’s first home game as a professional team was to be March 21st, against the Oakland Roots.  However, due to the pandemic, NISA suspended the season for 30 days on March 12th.  Eight days later, in compliance with Centers for Disease Control and Prevention (CDC) guidelines, NISA suspended the season until May 10th.  On April 27th, NISA officially cancelled the Spring/Summer season.

On July 1, 2020, NISA announced the Independent Cup, a regional competition of independent teams.  Four regions were created, and the winner for each region would be crowned that region’s Independent Cup champion.

Detroit City entered the Great Lakes Region with former Rust Belt Derby rivals Cleveland SC and FC Buffalo.  Each team would play each other once for the silverware.

The first match featured FC Buffalo and Cleveland SC at Veterans Memorial Stadium in Buffalo on July 29th.  Cleveland won by a score of 3-1.  The next two matches at Keyworth Stadium began with Detroit City FC facing Cleveland SC on July 31, 2020.

Despite the pandemic, the Northern Guard Supporters (NGS) kept busy in preparation for the inaugural women’s season, which, due to the pandemic, resulted in a two-match UWS Stadium Showcase Tournament at Keyworth the previous weekend.  NGS made its presence known by delaying the opening minutes of the Women’s team’s first match with a tifo drop and massive cloud of smoke…

…and introduced the newest Northern Guard Supporter, Smokey the Bot, a smoke-dispensing robot that could be operated remotely.  Every Detroit goal scored would be followed by a smoke celebration. 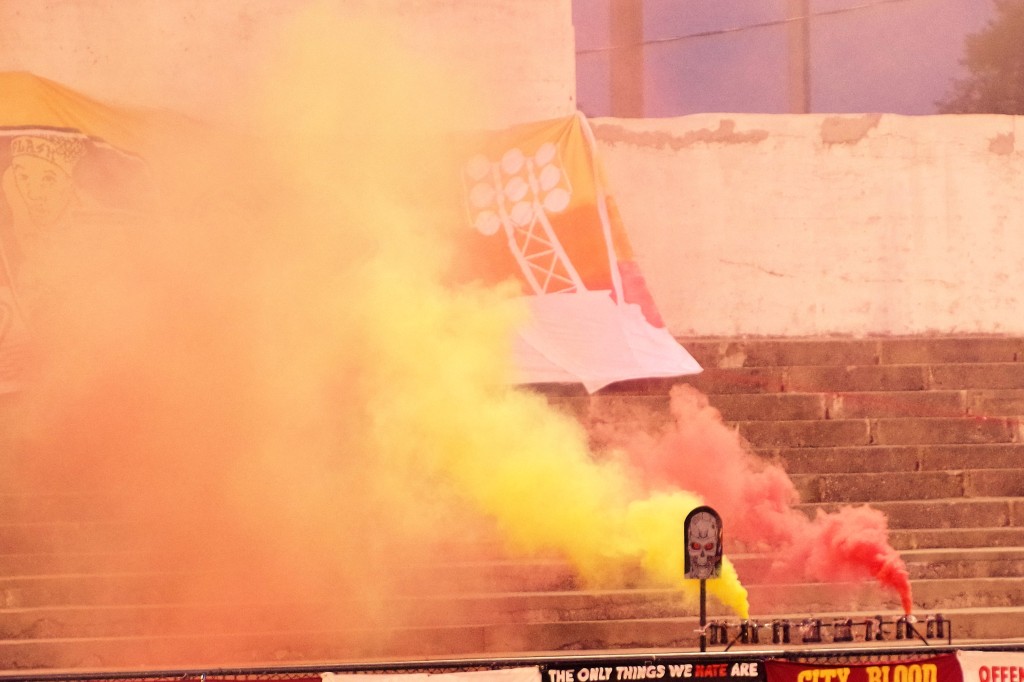 For this match, Smokey the Bot returned to the Supporters Section.  There was another smokey introduction to the match, and the south wall was nearly covered with a massive display of tifos. 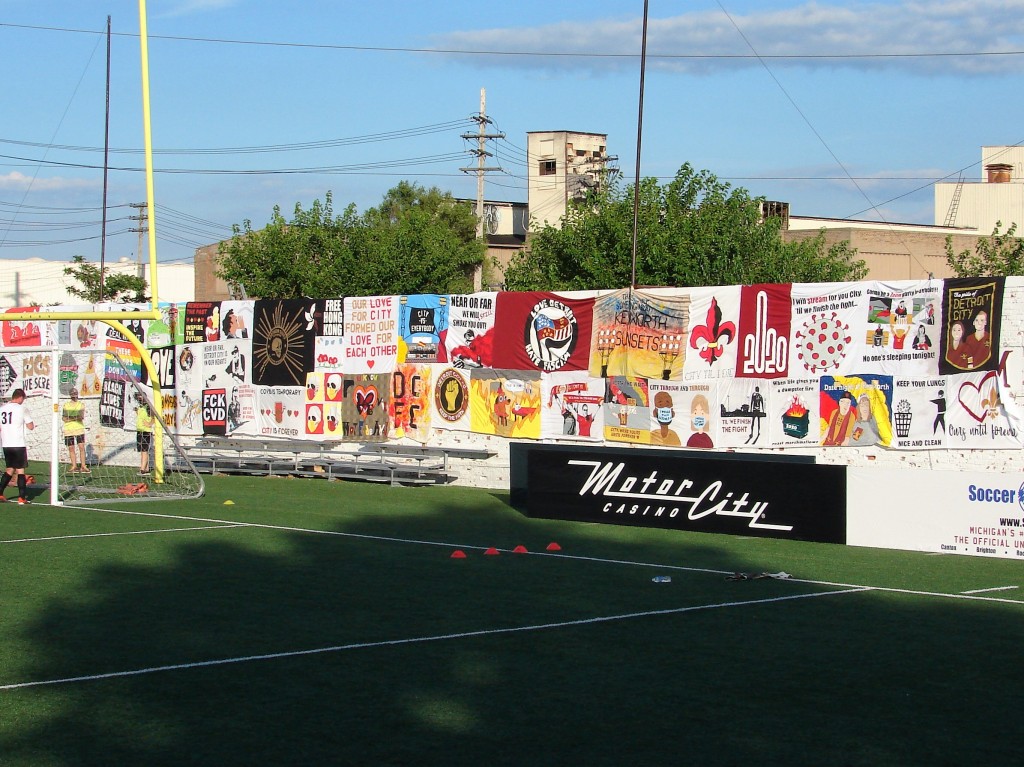 A close up of each one can be found HERE.

Also, about 30 hours before the match, Detroit City FC announced that a 10% interest in the club would be offered to the public.  Supporters could now invest and hold an ownership stake in Detroit City FC.  By game time, over $500,000 in shares had been purchased.  Here is the promotional video… 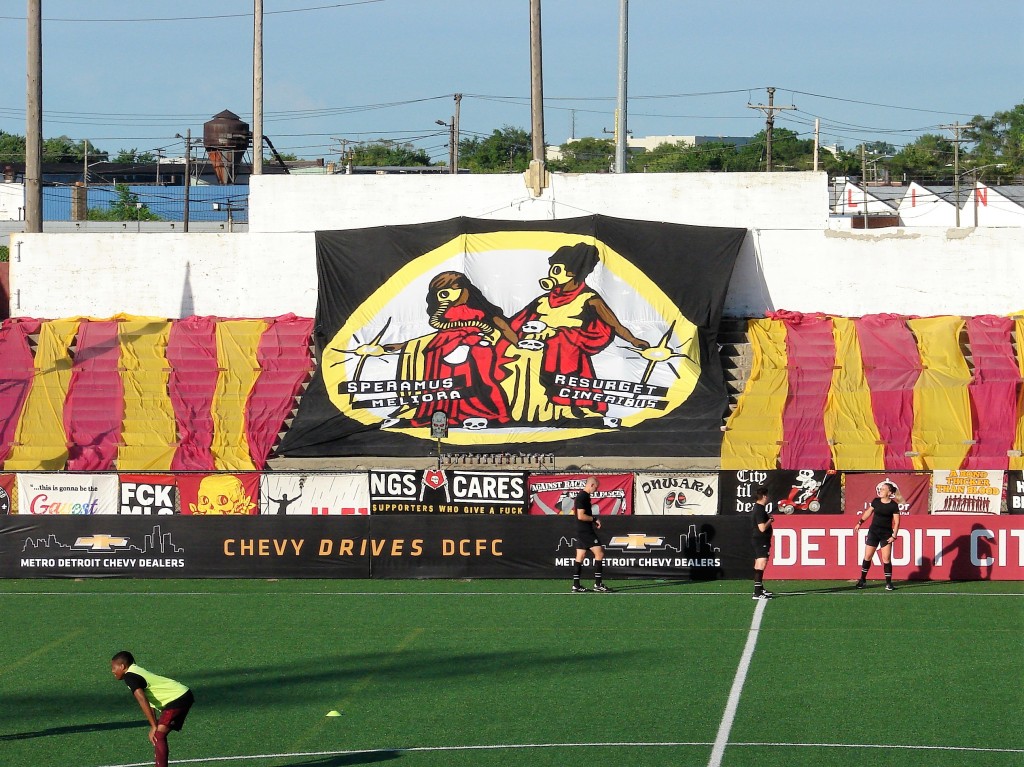 Smokey the Bot ready with the smoke.

During the pre-game warm-up, Detroit City FC players wore these stunning Black Lives Matter shirts.  The women wore them during their warm-ups, too, and they were so much in demand that the team took pre-orders purchases from supporters. 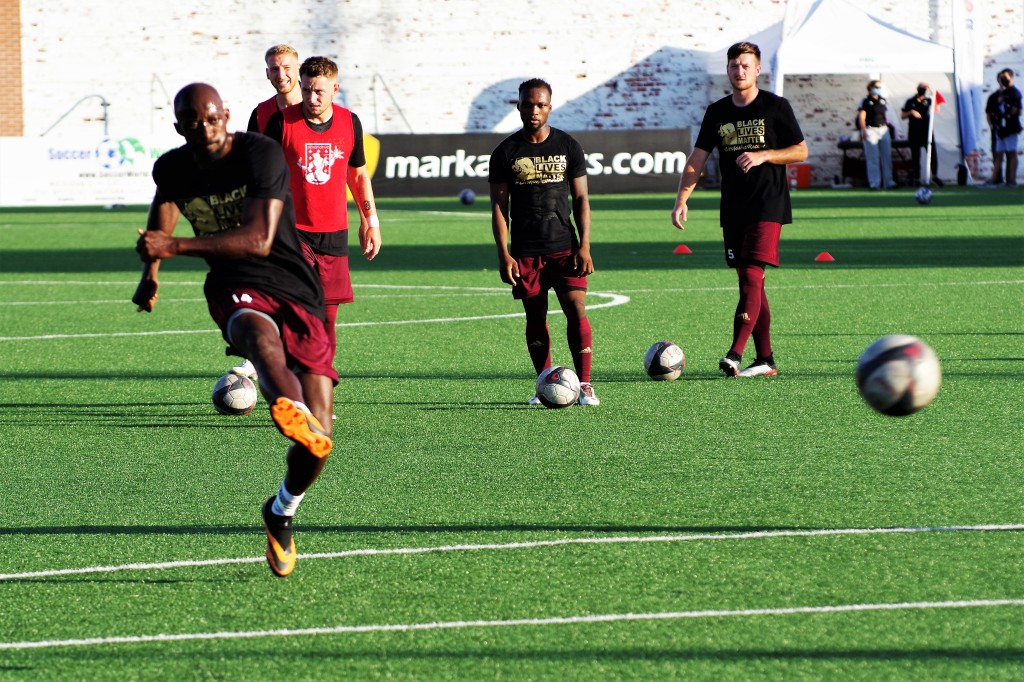 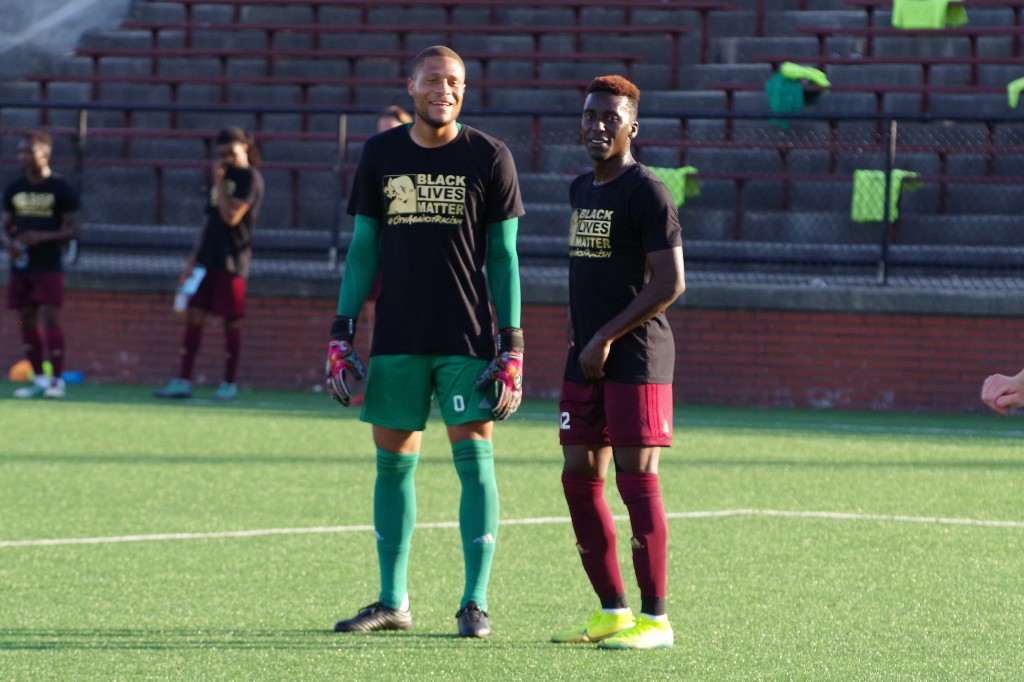 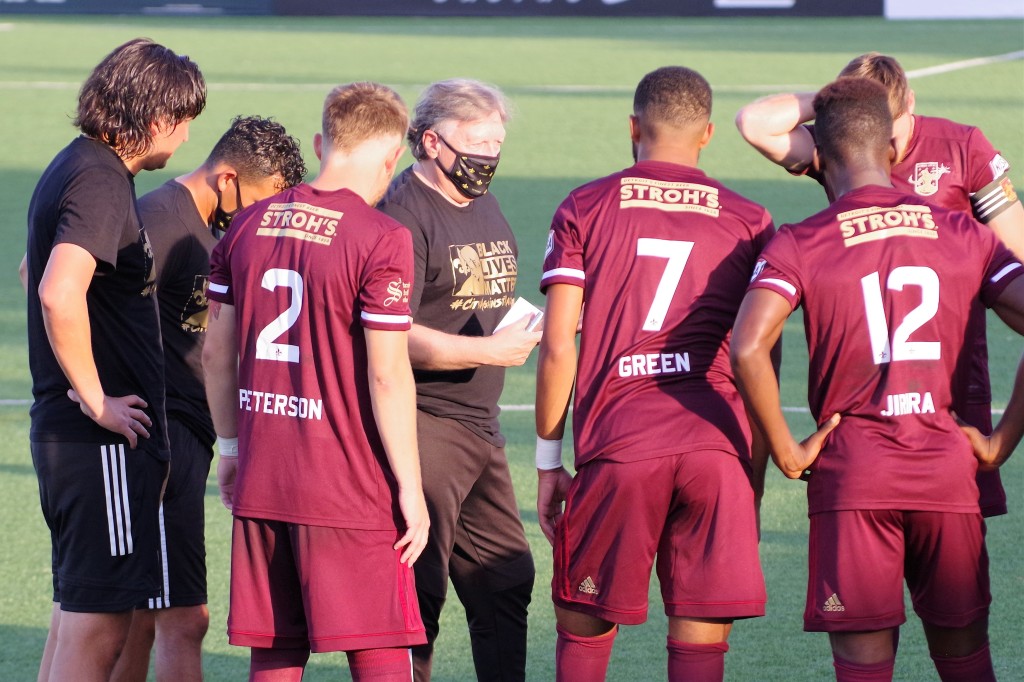 When the starting whistle blew, both teams, coaches, and officials, took a silent knee to stand up for social justice for thirty seconds.

Once play resumed, the smoke began. 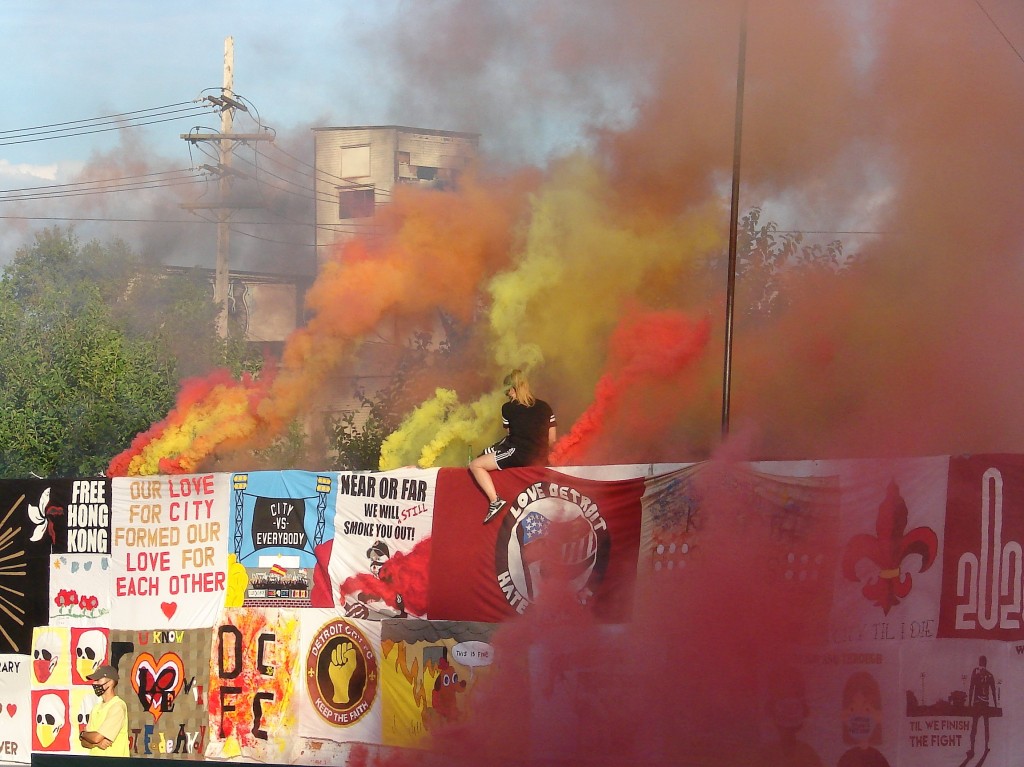 City controlled the first half, having several chances on the Cleveland goal. 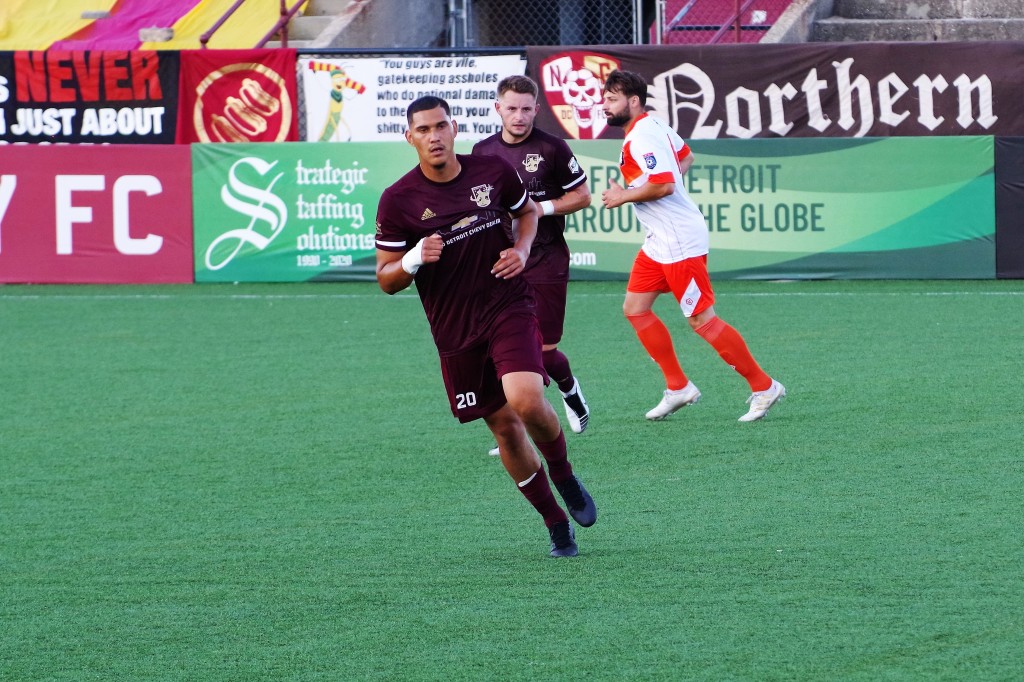 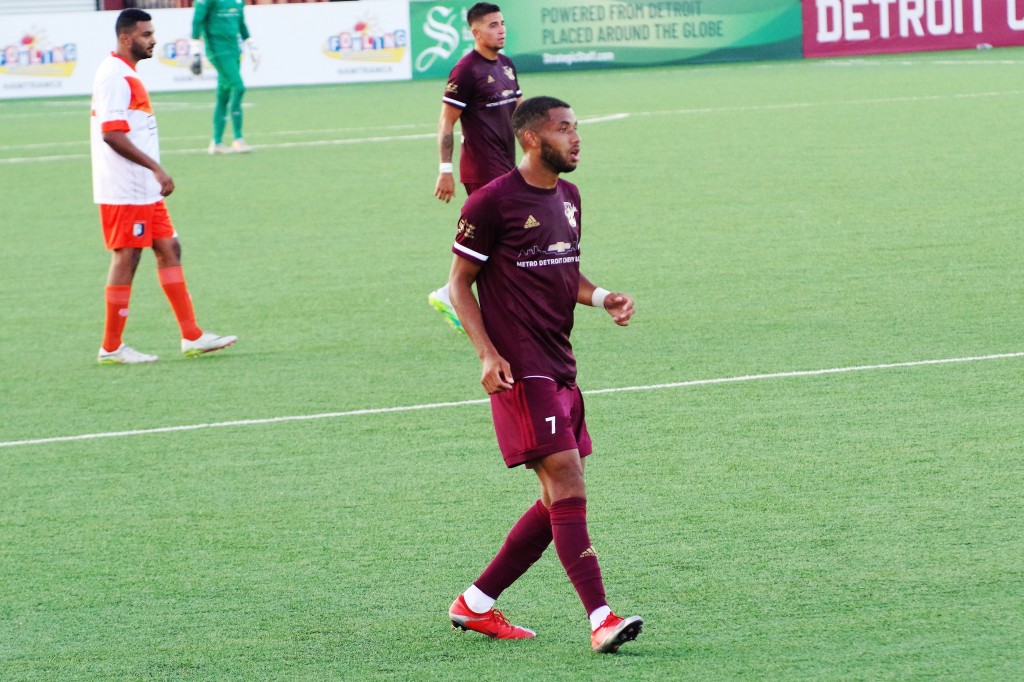 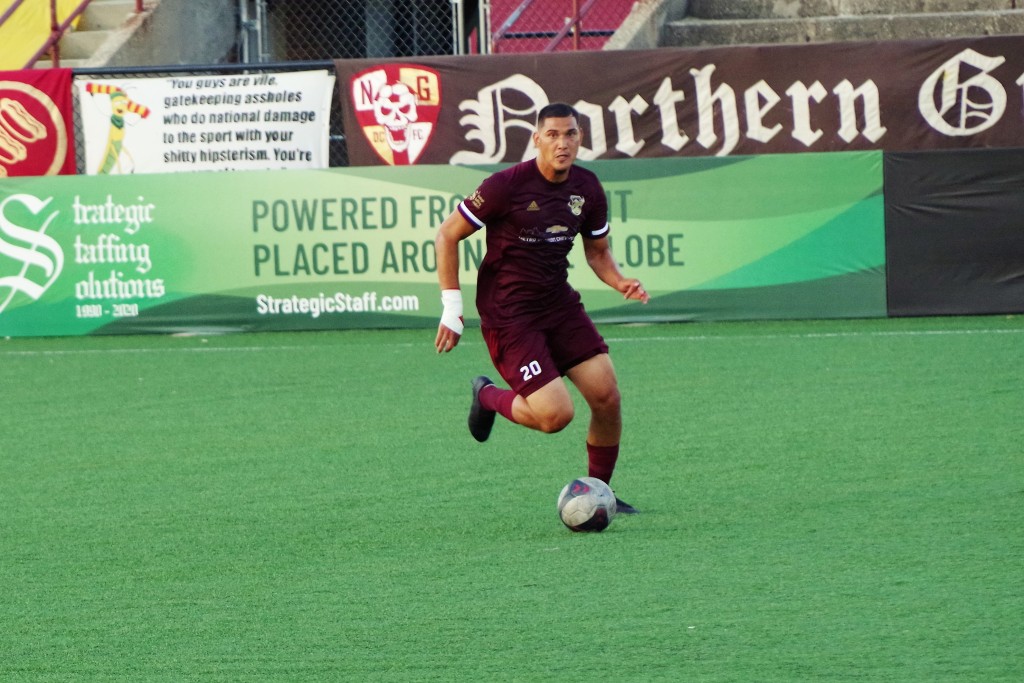 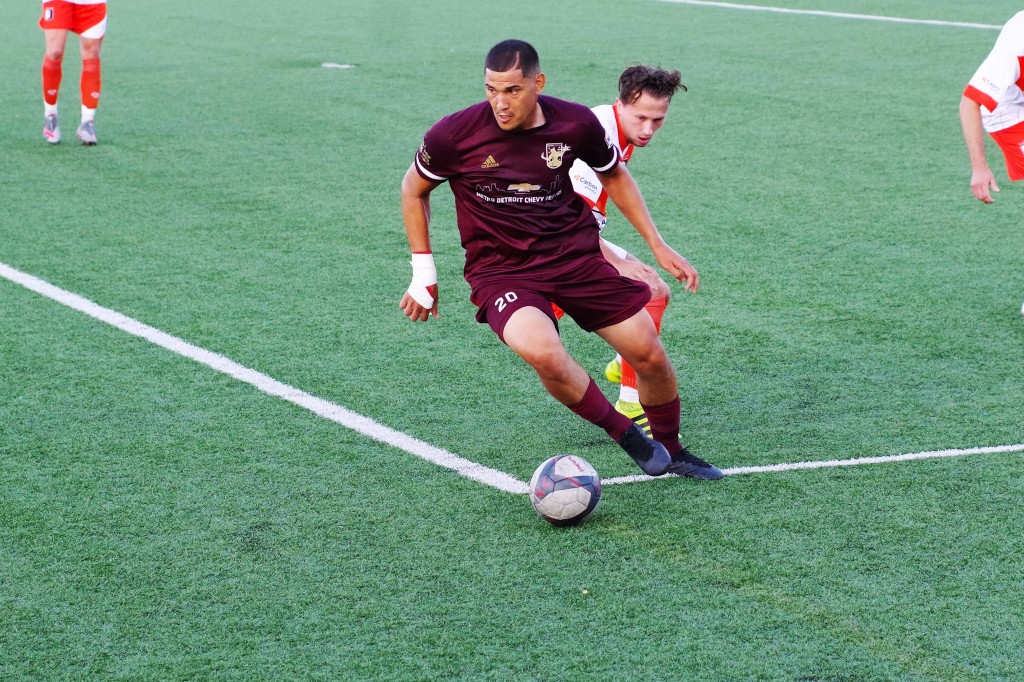 Finally, the breakthrough.  Evans Frimpong directed a quick ball through to Roddy Green.  Green ran it down the right side then fed a beauty of a pass in the box where Ryan Peterson dove low to head it past Cleveland’s keeper, Conor Cable. 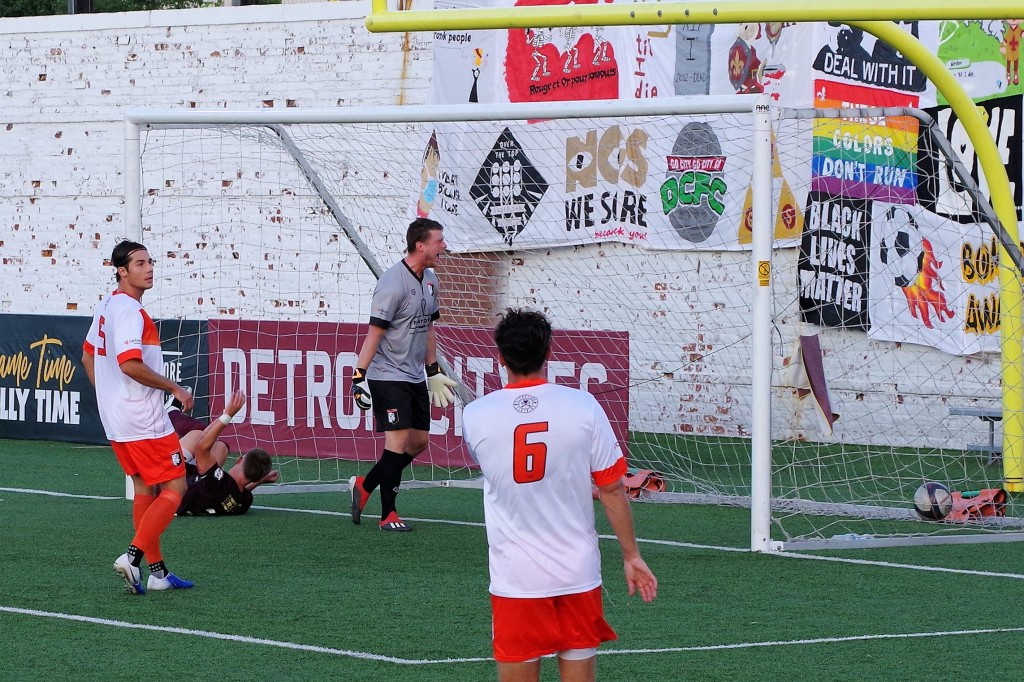 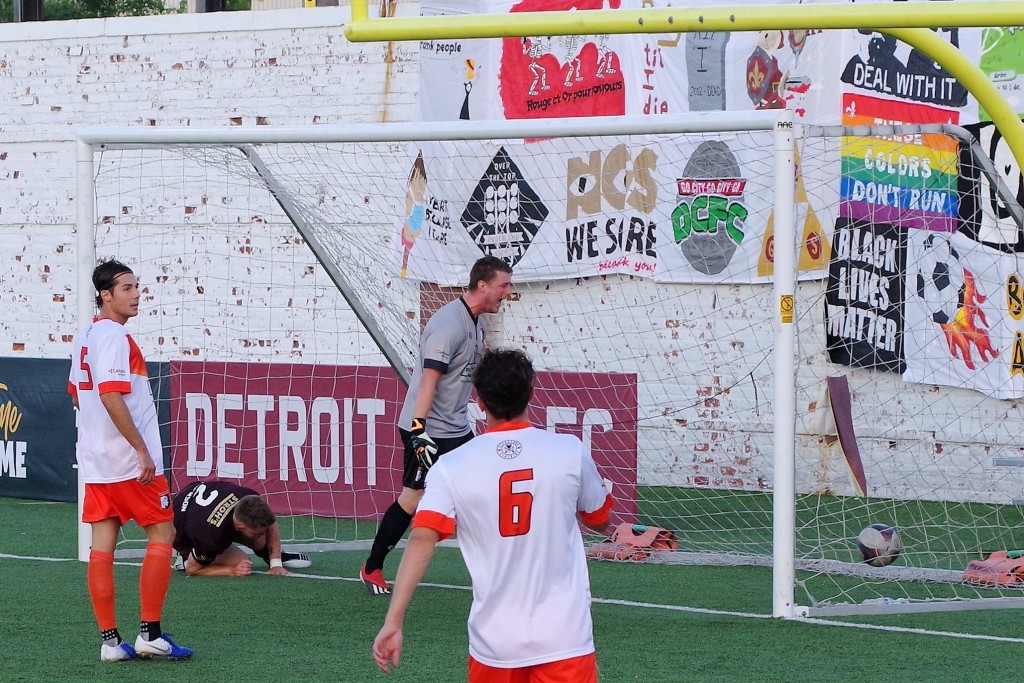 Smokey the Bot launched the celebration. 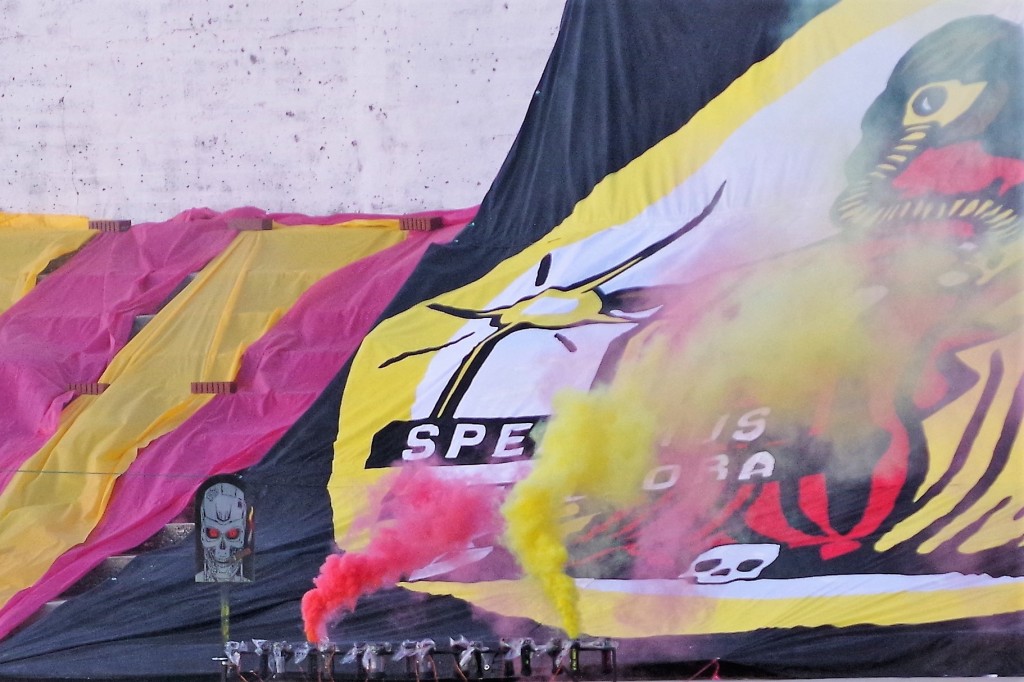 City went into halftime with the 1-0 lead.

City continued its domination in the second half.  Michael Kafari was taken down just outside of the Cleveland box.  This set up Connor Rutz’s wicked blast to give City a two goal lead.

Smoke billowed in the background, however it was not from the Northern Guard. 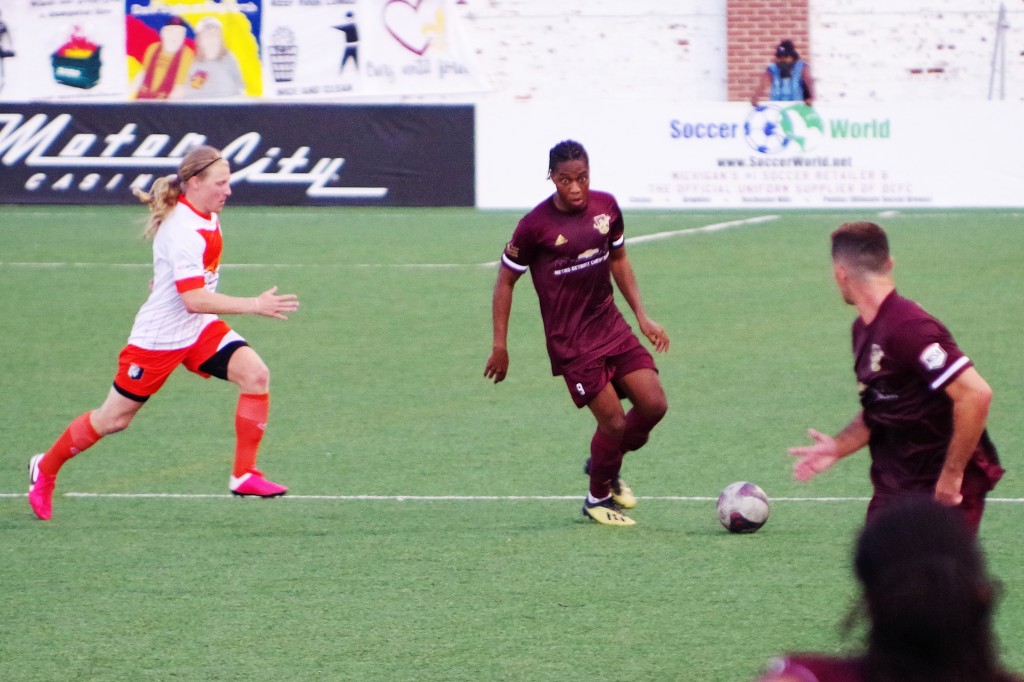 City increased its lead in the 65th minute as Connor Rutz sent a pass across to Shawn Lawson, and Lawson did what he does…he scored. 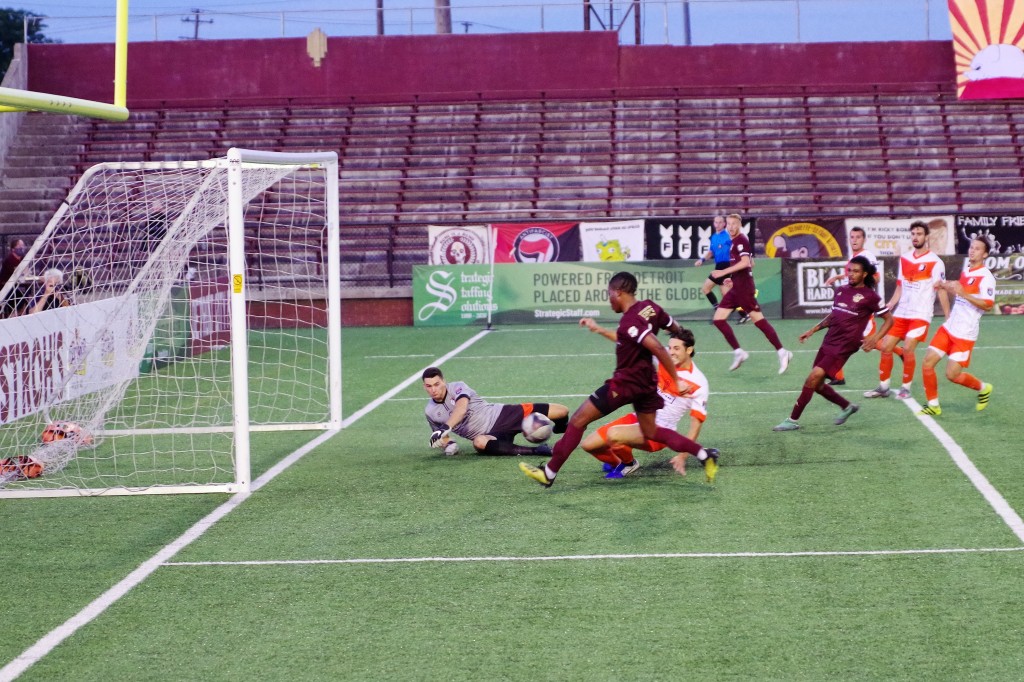 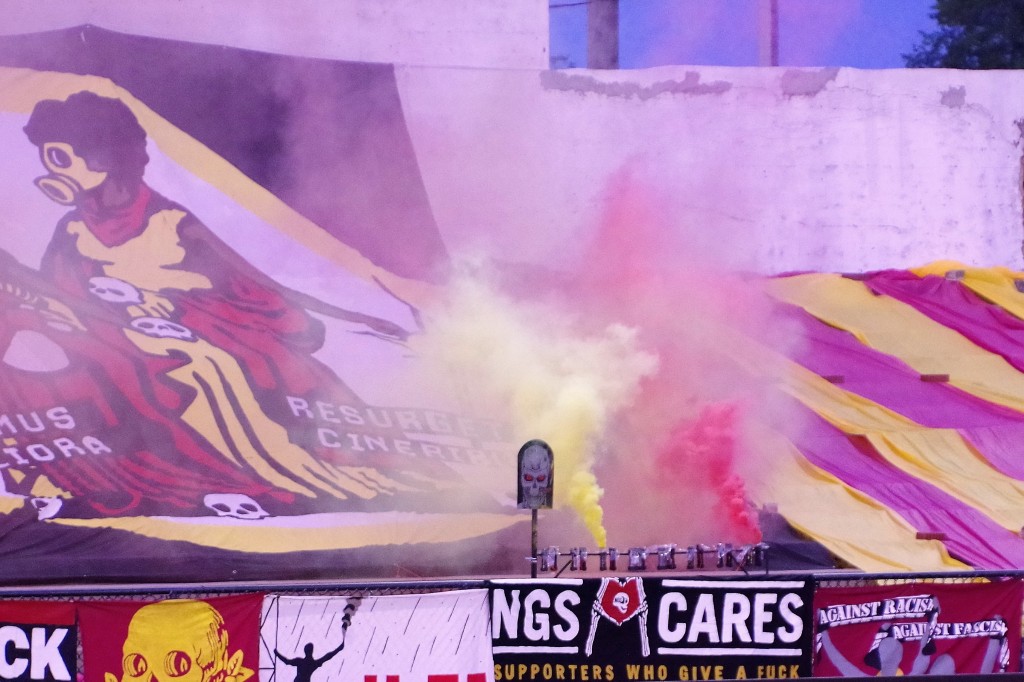 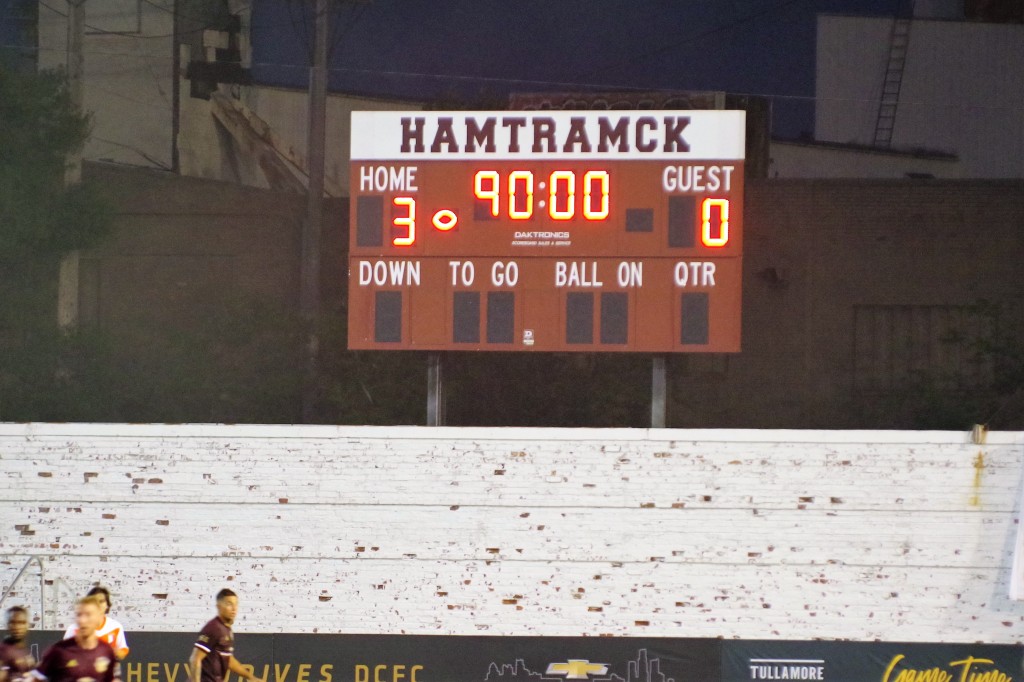 Ahead of Sunday’s match against FC Buffalo, the standings looked like this.