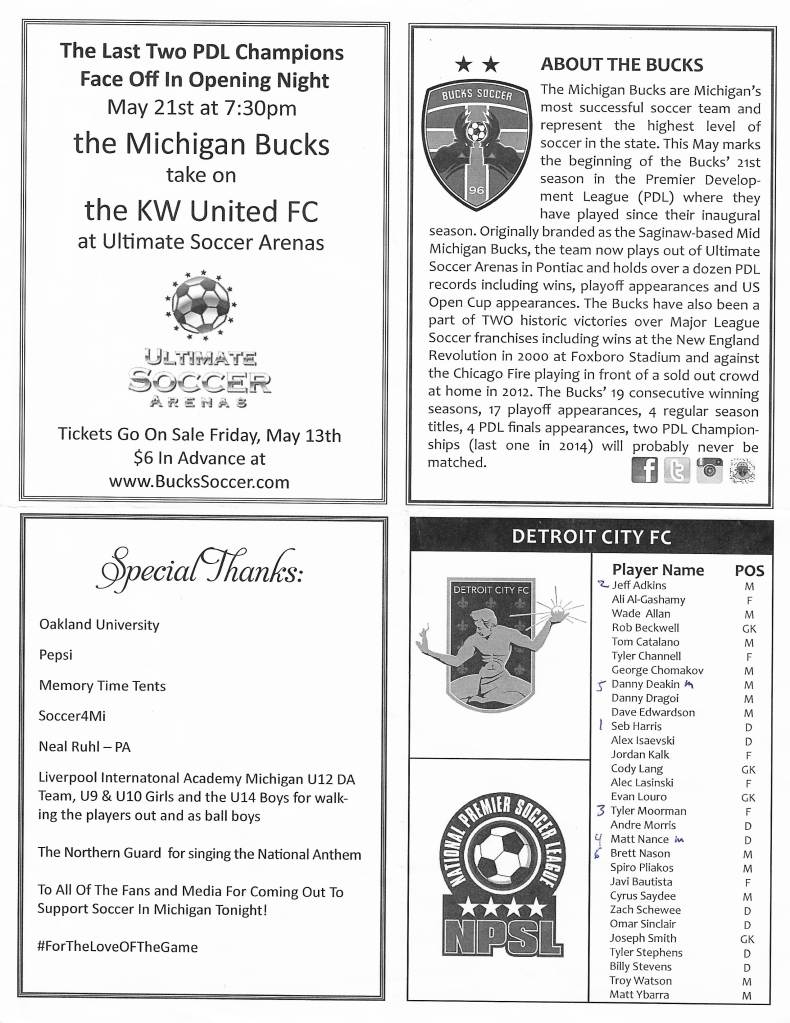 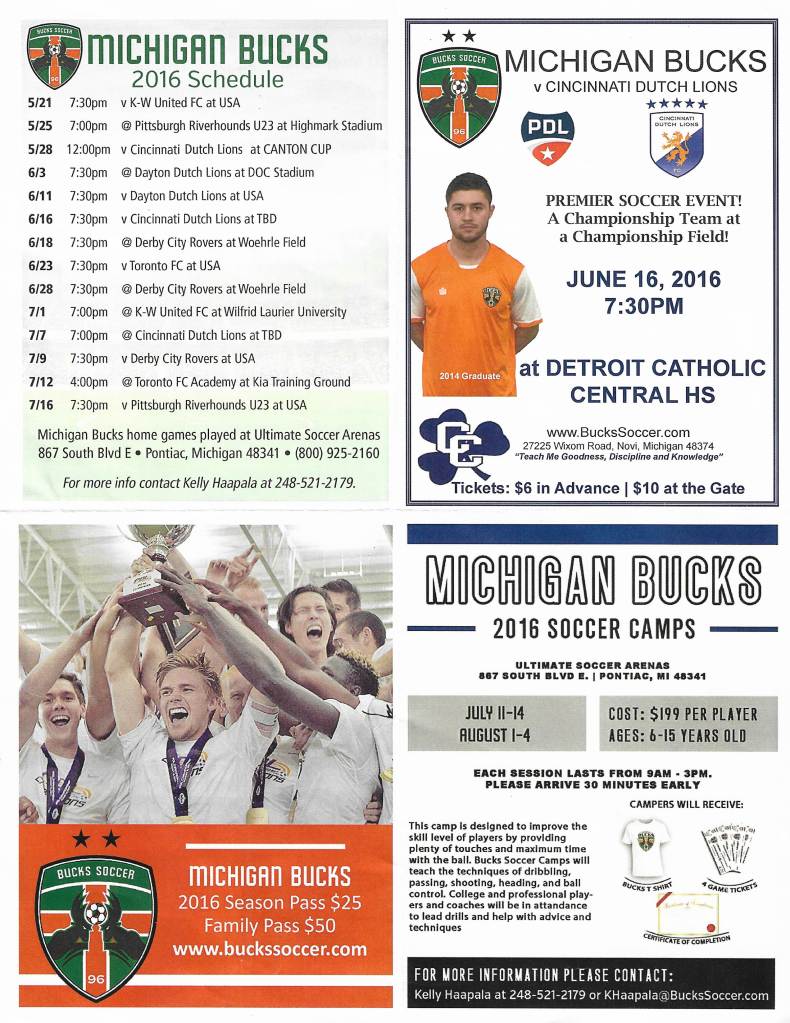 For the second year in a row, two opposing soccer forces meet in the First Round of the Lamar Hunt U.S. Open Cup.

The Michigan Bucks of the Premiere Development League have honed the skills of soccer players for over two decades.  They have won championships and set records within their league, and have eliminated Major League Soccer teams from this US Open Cup competition.  Though they have this tradition of excellence, it has been unable to generate any form of fan base.  They are about developing players and the game of soccer, and not a form of entertainment and community.

We, Detroit City FC, however, are all about the growth of team, supporters, and community.

With the recent talk of Dan Gilbert and Tom Gores drooling over the possibility of building a soccer stadium in Detroit to lure MLS, the Michigan Bucks and Detroit City FC differ in philosophy with them, as well.  The Bucks only get large crowds (and by large, I mean barely enough to fill Cass Tech High School – the stadium DCFC outgrew), when they play an MLS team or us.  Its owner, Dan Duggan, though, has been trying to create interest in an MLS franchise for years.  On the other hand, the huge fan base of Northern Guard Supporters want no part of MLS.  For us, our club is greater than the league we play in. 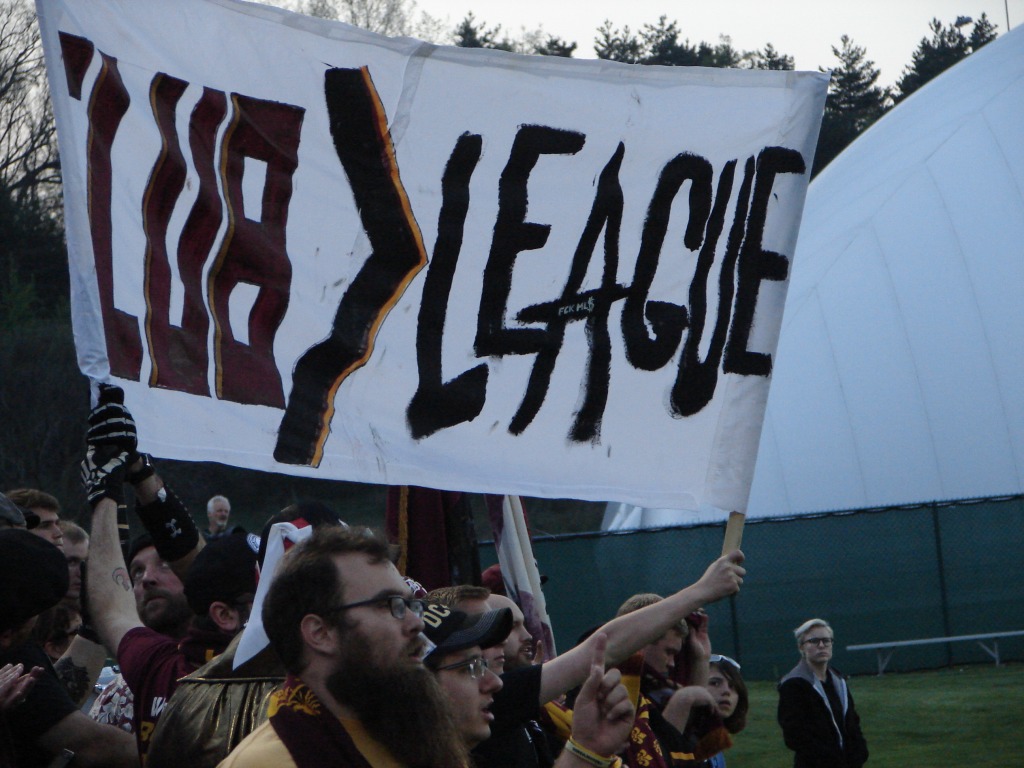 One year ago, the first collision of competing philosophies took place on the pitch.  Le Rouge supporters filled the Ultimate Soccer Arenas in Pontiac, but the Bucks dominated on the turf, winning easily by a 3-0 score.  This year would be different.  First, the game would not be played in the tin can, but on the Oakland University soccer field.  The Northern Guard occupied a section along the grassy hill below the bleachers, close to the pitch where the players could not avoid the taunts and chants. 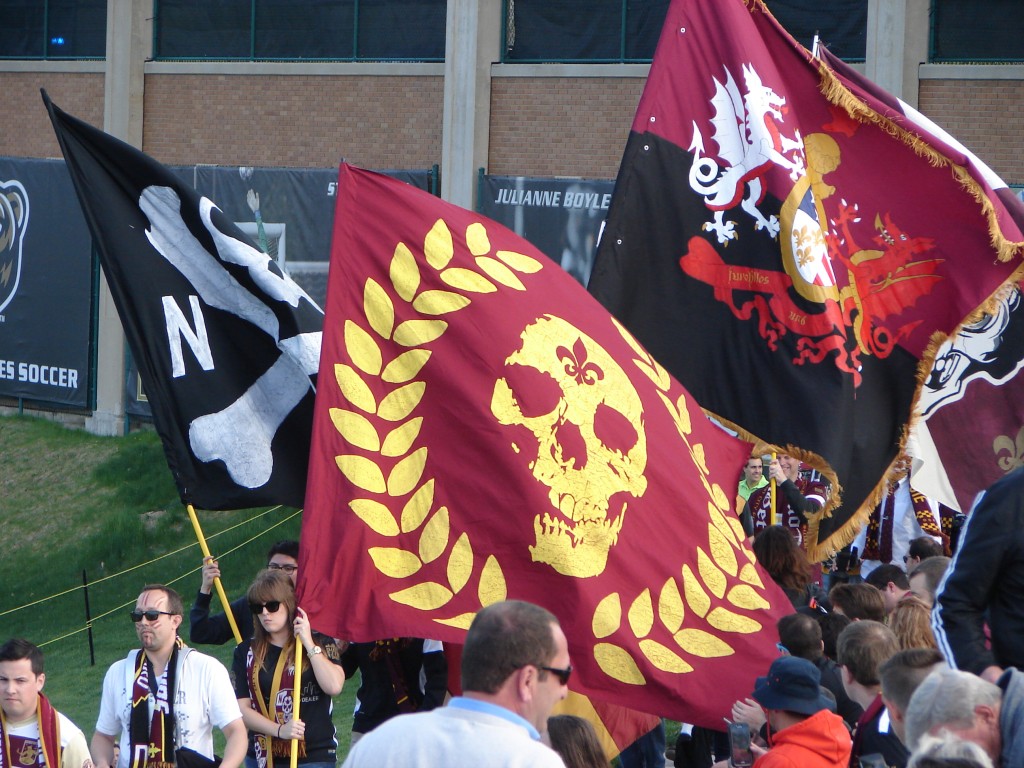 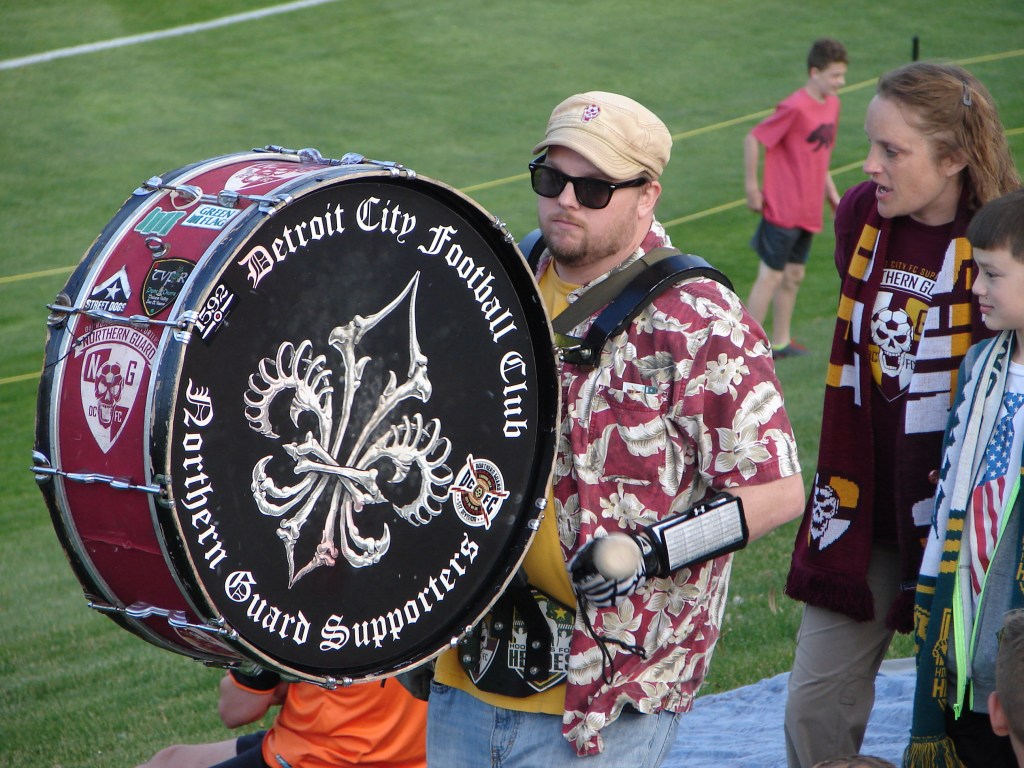 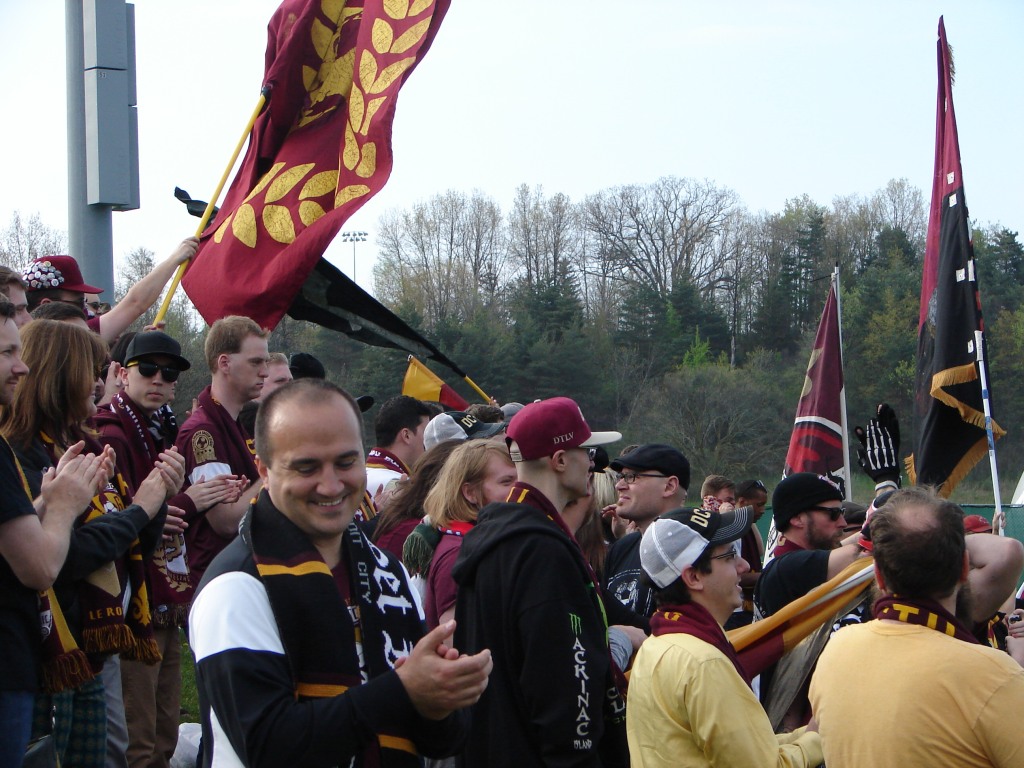 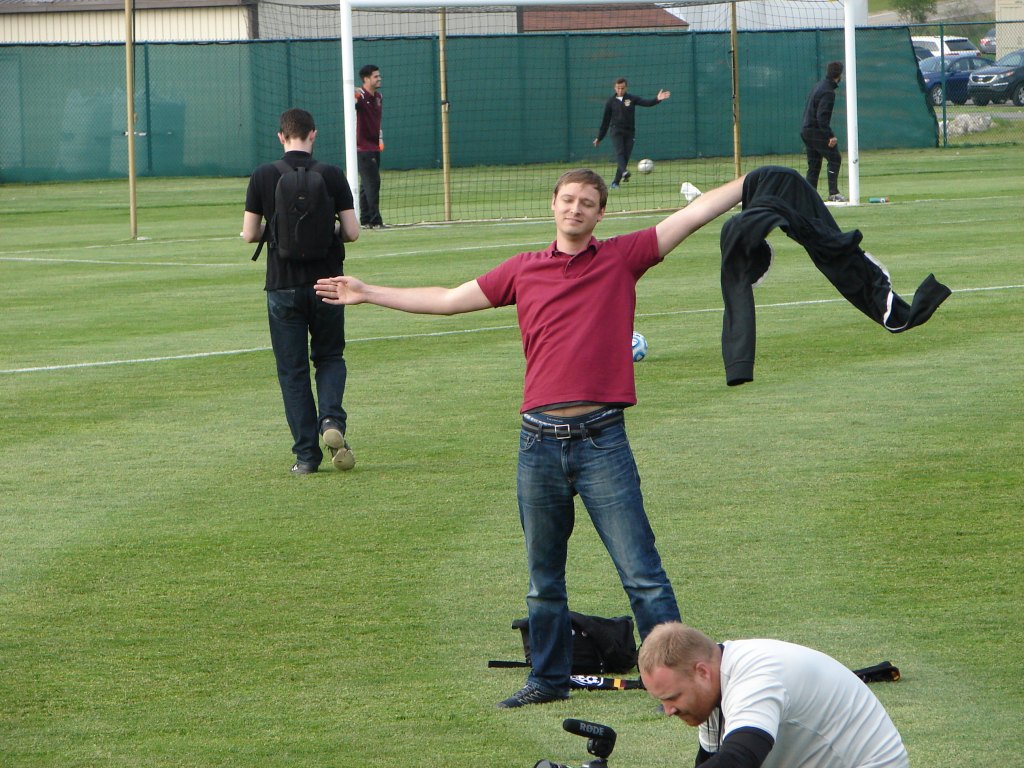 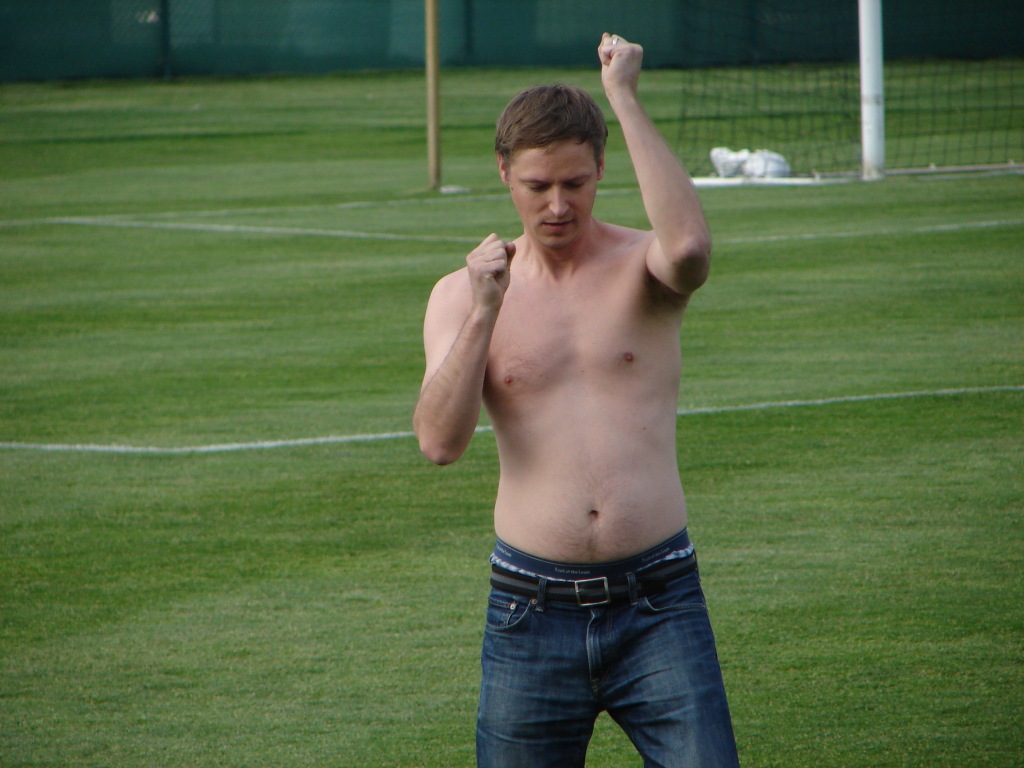 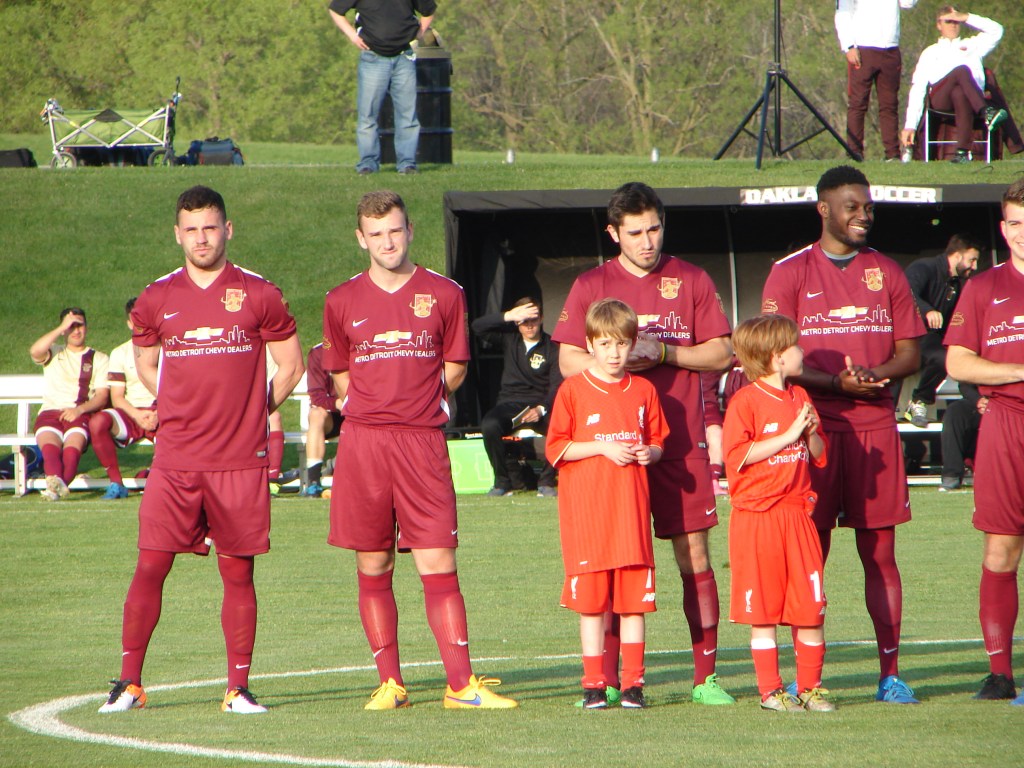 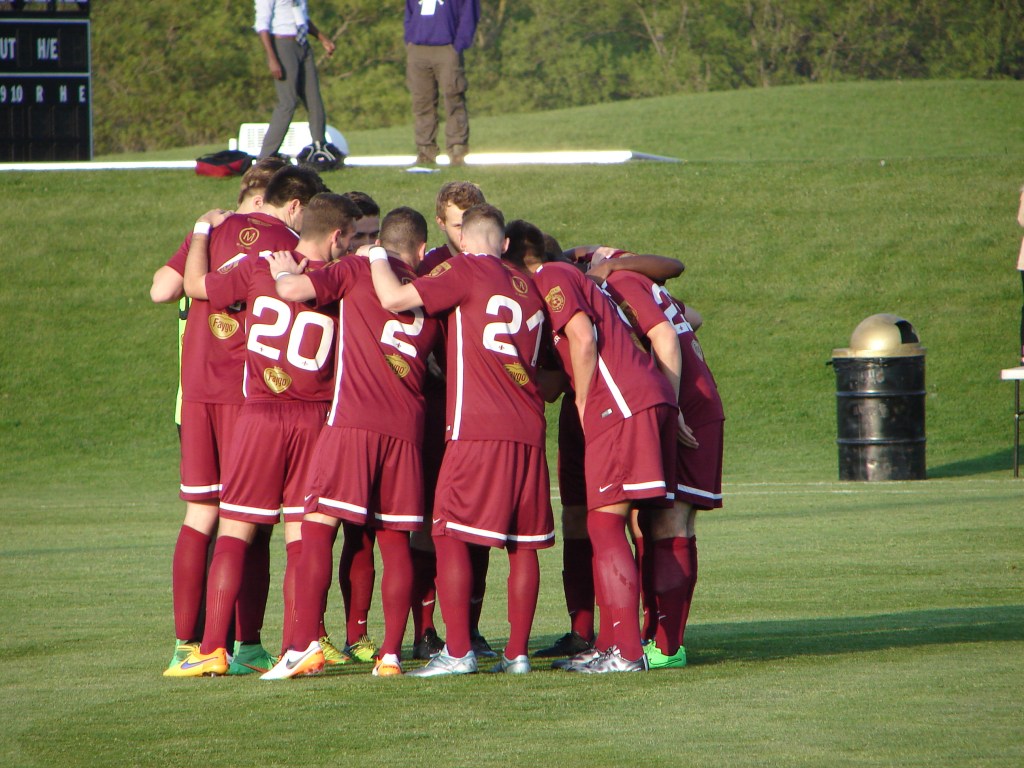 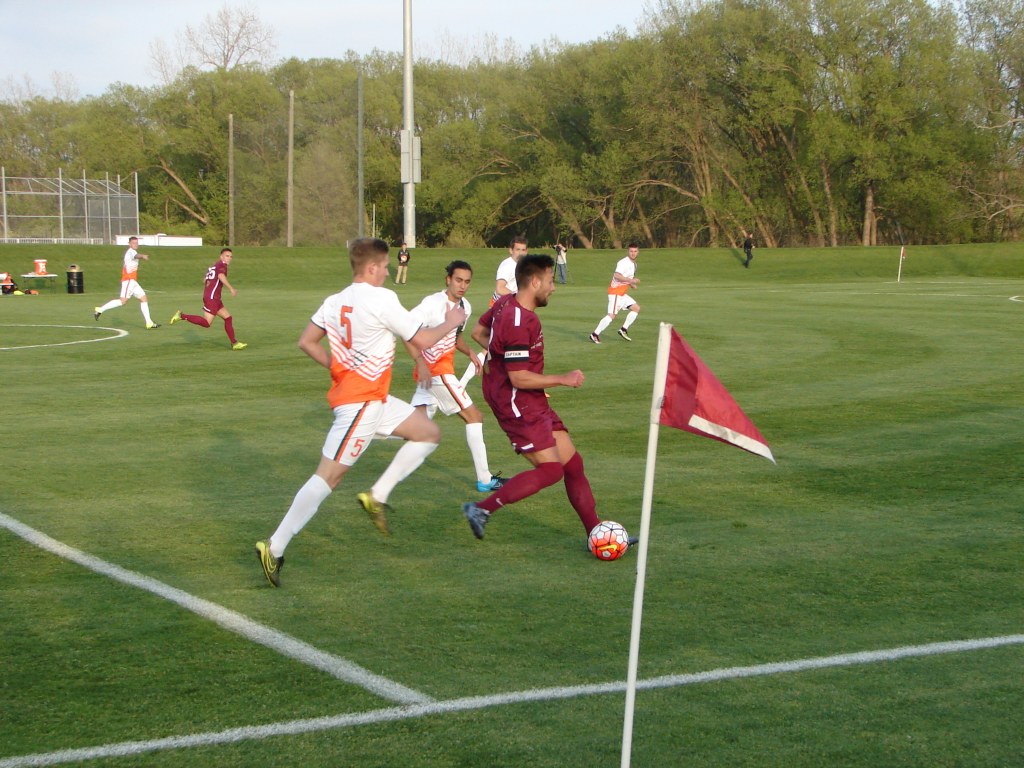 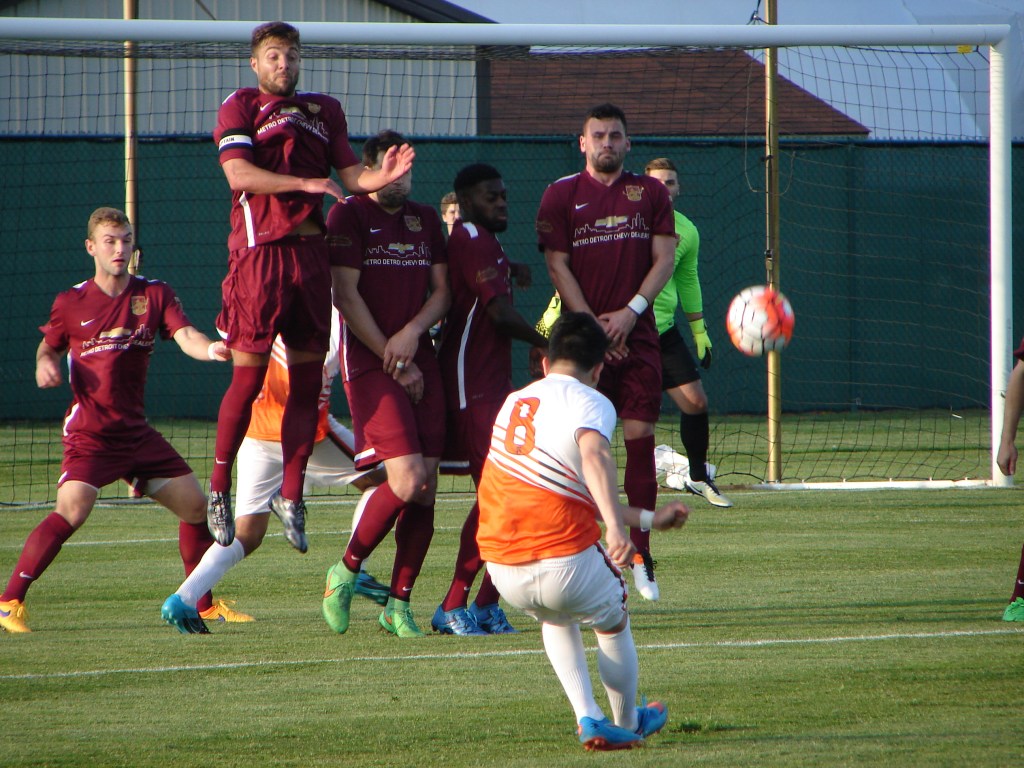 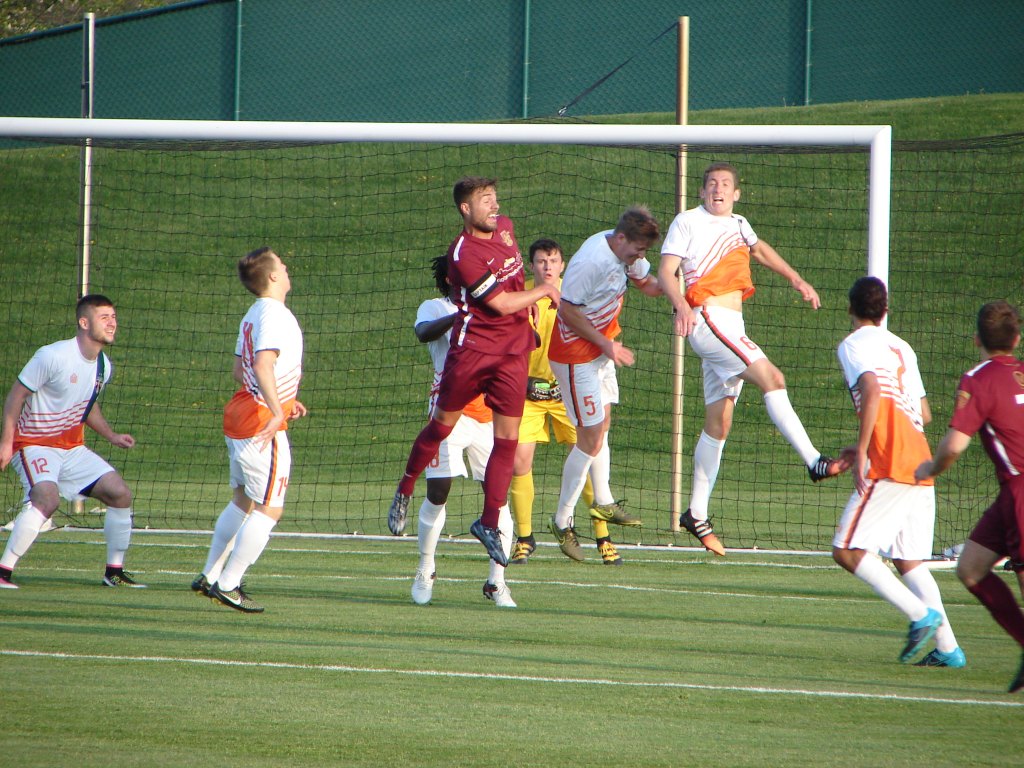 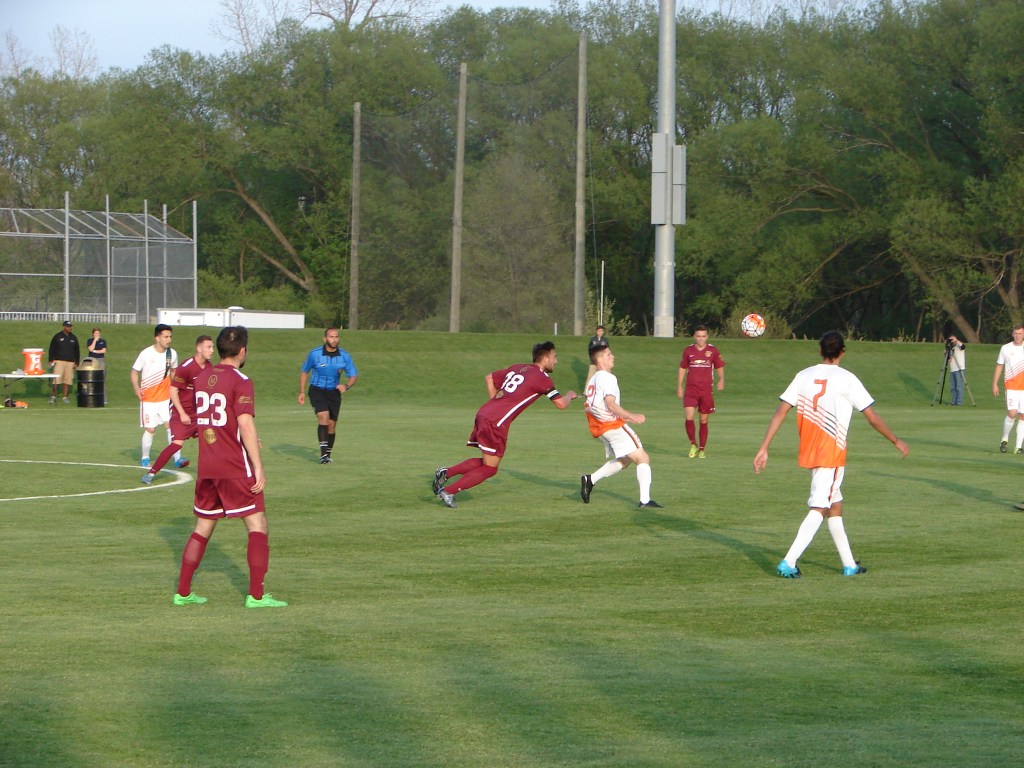 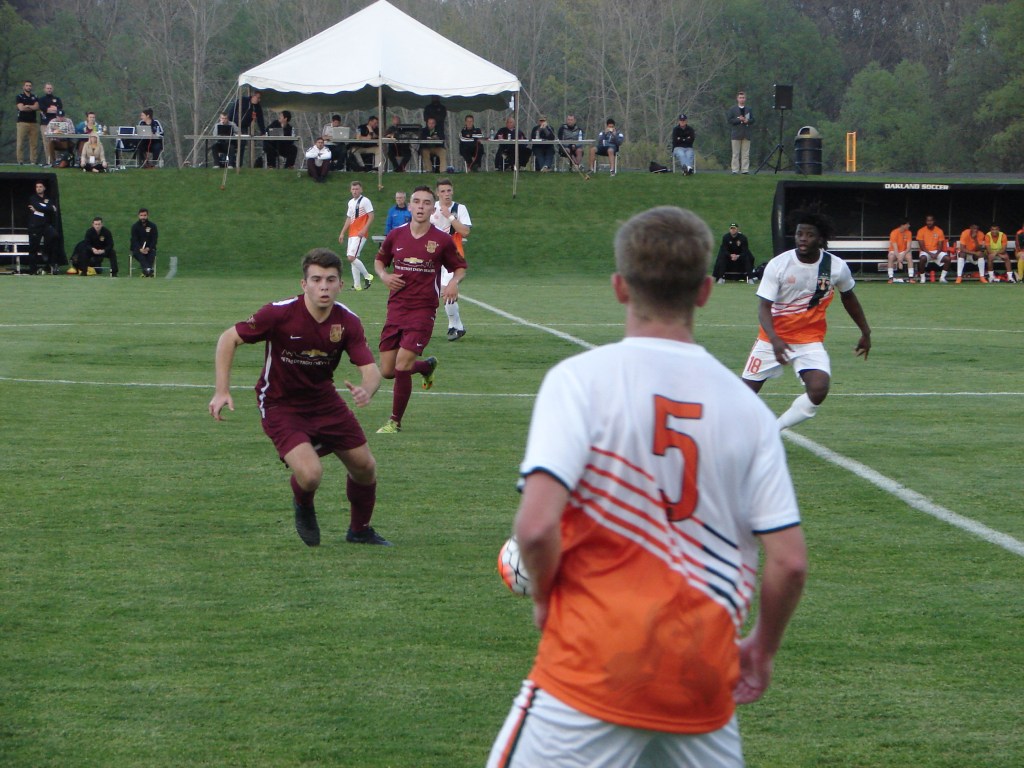 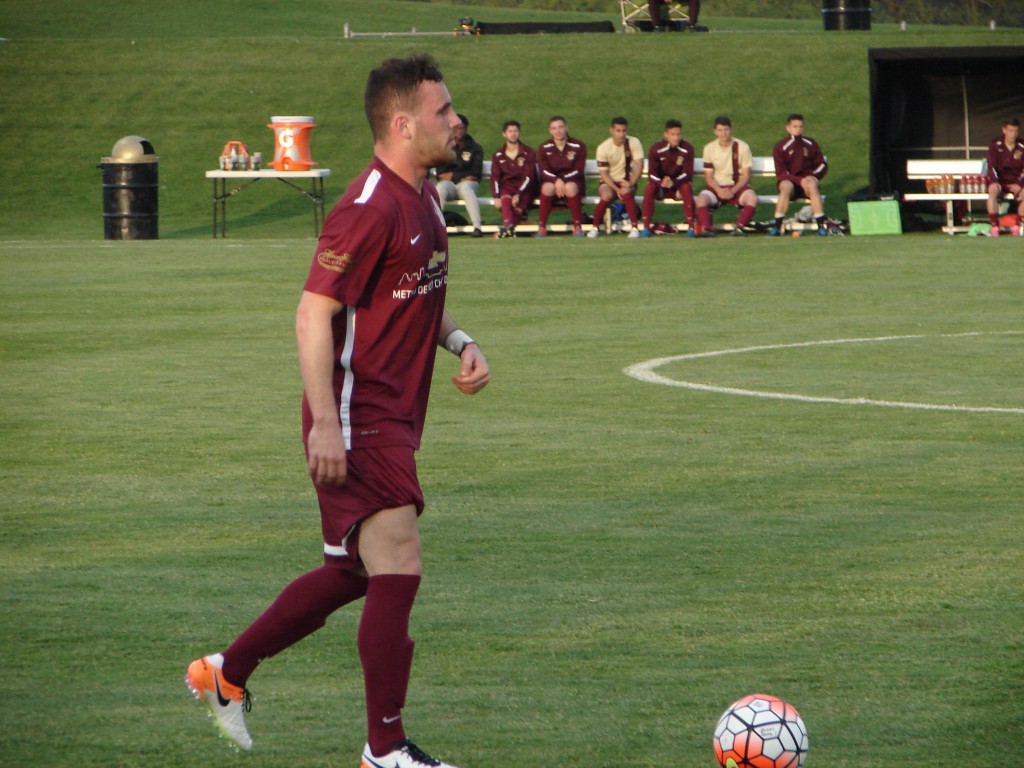 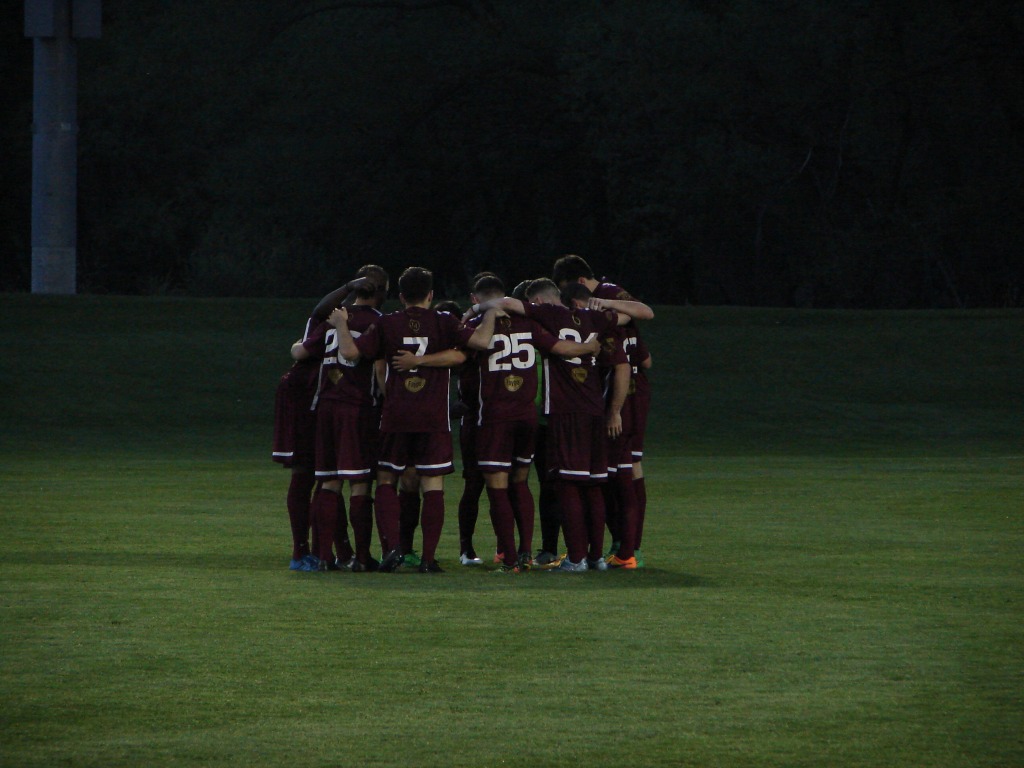 The Bucks controlled most of the play on the night, with Le Rouge sitting back, absorbing the pressure, then releasing the occasional counter-attack.  As the minutes wound down, the tension within the Northern Guard was palpable.  With no goals scored after ninety minutes, extra-time commenced.  Thirty minutes more of the stalemate took the game to penalty kicks.

Midfielder Russell Cicerone stepped up next for the Bucks.  While his shot went on target, keeper Even Louro made the save.

For Detroit, Jeff Adkins stepped up to the spot.

The Bucks got on track when Adam Najem scored on his attempt.  Then, newcomer to Le Rouge, Tyler Moorman, took his shot.

Andre Landell closed the gap.  A goal by Matt Nance would put it away for Le Rouge.

The Bucks’ survival fell on the shoulders of Jordan Snell, who scored.  Danny Deakin stepped up for Le Rouge.

Could this game be more dramatic?

Tied after the five shooters, it was now head-to-head.  The Bucks called upon Brad Dunwell, but Evan Louro came up big.

The match now hinged on this shot.  Brett Nason, another new face in the DCFC squad, took to the spot.

This is tremendous.  Like I said in the buildup, I think we wanted this a lot.  Last year we were naive – myself , my staff, my players.  This year, we were focused and I think you saw that after the first minute.  We played hard.  I told our guys the result will take care of itself, you have to be the hardest team on the field and we played the hardest.

The owners, they put all this time, energy, money and passion into it.  These fans, they’re crazy.  They’re the reason we won.  They get the man of the match.  For our community, for our city and for this club, this is a huge step forward to get the monkey off our back.

This is a community-run team that started five years ago in a bar in downtown Detroit and we just beat arguably the best amateur soccer team in America.

My favorite piece was written by Joe Hojnacki at www.LastWordOnSports.com:

The win was huge, obviously.  But, again, that isn’t entirely what this match was about.  It was about a culture thriving in the face of adversity.  It was a group of people who have built something spectacular not wanting their hard work to be destroyed by a bunch of men in suits with money coming out of their eyeballs.  Detroit City’s loyal fanbase wants to prove that they will not only survive, but be extremely successful regardless of what higher power brings top tier soccer to the city.

Tonight was only the start of that miniature war.  Get used to the theme of results not mattering, win or lose, throughout the upcoming NPSL season.  This entire year will be about the support that Detroit City FC is getting both locally, and nationally from other supporters groups and clubs at every level of the American soccer pyramid.  Their fans are loyal to a club.  Not a league.  Not a tier in a pyramid.  And not, most importantly, rich investors.

You can bet that every home match at Keyworth Stadium will feature the Northern Guard feeling as if they are doing battle with the establishment.  Yes, the wins that Detroit City will likely rack up will be nice.  But showing the world that Le Rouge and their culture will survive, whether they get involved in the MLS talk or not, will be much more important to the long term success story that is, and will continue to be, Detroit City FC.

The next afternoon, I was still feeling the hangover from the dramatic and emotional victory.  I posted the following on my Facebook page, which resonated with my NGS friends:

Please excuse your employee if he or she is a Northern Guard Supporter.  All of us are floating a few feet above the ground today due to last night’s historic event.  You had to be there to understand.  Gravity will eventually pull our feet back to the ground.  Allow us this period of euphoria and we will return to being the productive and hard workers you employed.  Just like our team. 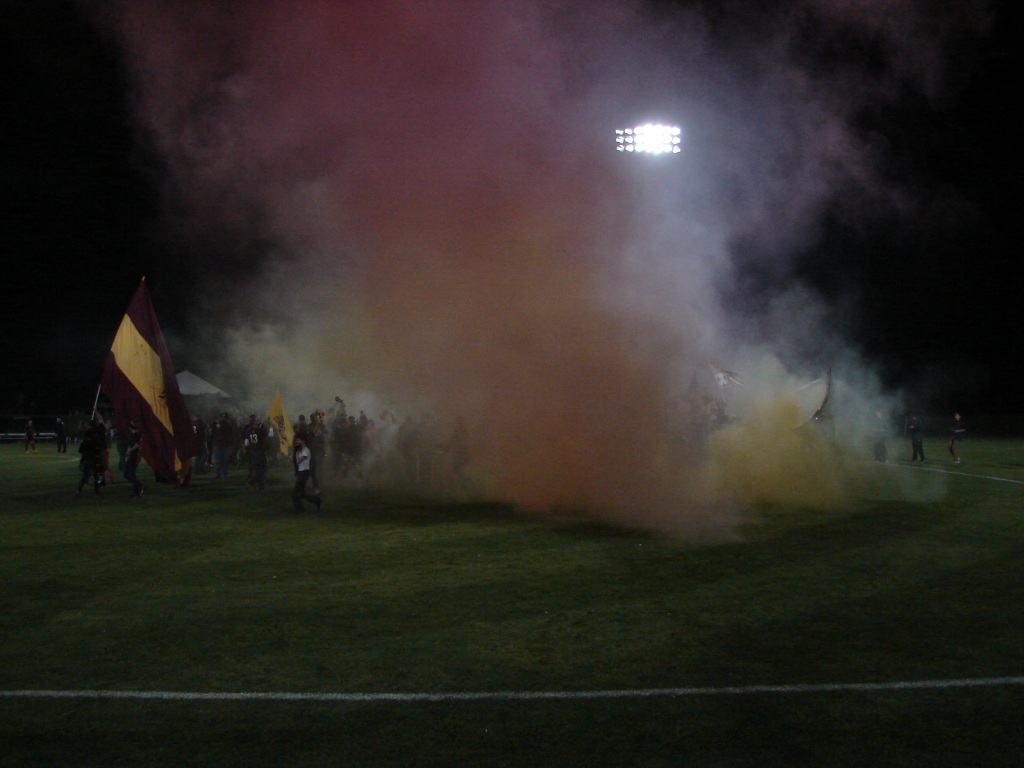 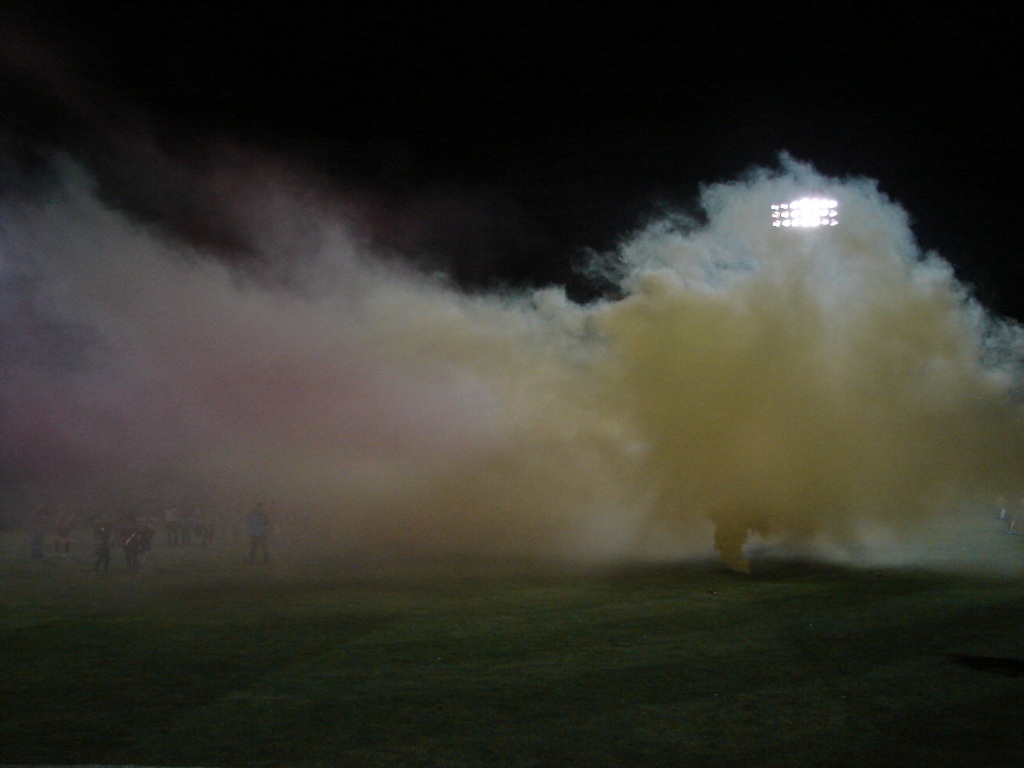